Oooh fancy fancy. After our snowmobile tour (which was fun but also scary because my snowmobile flipped), we decided to go to Araxi, a well known high-end restaurant in Whistler. This place is pretty pricey and I actually wasn’t sure if we can enter the restaurant considering we were all in our winter snow gears and boots, and pretty much soaked inside out. Apparently that’s alright for the restaurant because we were seated promptly. 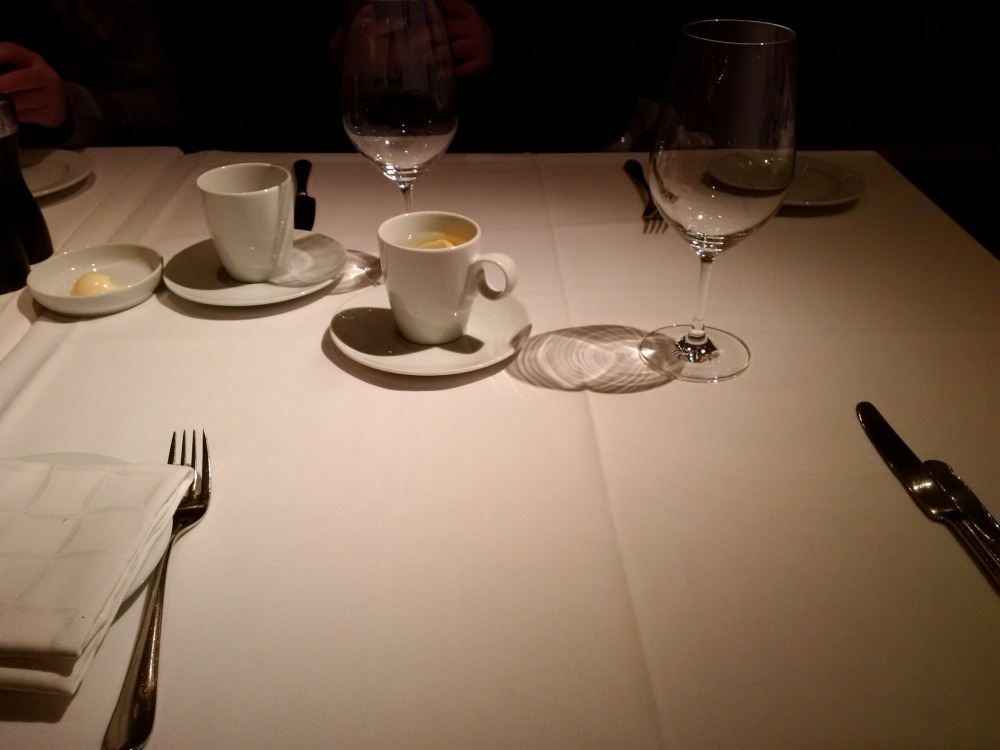 As I’ve said, this restaurant can be pretty pricey, if you get 3/4 courses on their menu it can easily add up to $100+. For some reason they had a special menu offered when we were there, that offered a 4-course menu for like $30-40 (I forgot how much exactly). Obviously we chose that. They had several options to choose from in regards to appetizers, entrees and desserts.

The menu comes with a squash soup, that was well flavoured. It was a bit too heavy on the cream in my opinion but it really made you feel comforted considering we were all still a bit damp and cold from the winter weather outside. I find the soup a bit too salty for my liking though. I have no comments on the stuff accompanied on the spoon (not quite sure what they were).

They also have 2 types of bread rolls that was complimentary. They were quite dense so if you had it with the soup it’s a perfect match.

For appetizers, they had a choice of albacore tuna, something else, and if you add $8, fois gras. I decided to be rich that night and opted for the fois gras. When it arrived I was quite surprised as I was expecting a cooked fois gras, mainly because I was stupid and didn’t pay attention to the ‘parfait’ part. The dish was a cold plated fois gras that you smear on the toast provided. Hm. Well, there wasn’t enough toast to smear the fois gras with, so I guess that’s a compliment on the generosity of the dish? At this point, I was thinking maybe the overall flavour of the restaurant is quite heavy, because I thought that this dish was also a bit too salty for my liking. We each shared a bit of each others’ food, and we sort of shared the same mentality. I would rather have my friends’ tuna than this though, to be honest.

For the entree, I ordered the Wild Mushroom Risotto, which was fantastic. It was creamy, flavourful with each bite. The aromatic mushrooms was pretty much fused with the risotto, complimenting the overall flavour of the dish. At first bite, you’ll taste the creaminess of the risotto, then come the spice, and at last the mushroom scent lingers in your mouth. However, again, a bit too heavy on the cream, and a bit too salty for everyone in our group. (Maybe we are just bland people?! I don’t know?!)

My friend ordered the duck breast from the menu, and the meat was so tender and juicy it was wonderful. Not a huge fan of the orange puree, which I assumed to be carrots and some other type of veggie. It didn’t really come together with the duck, since the duck breast was well flavoured with spices that doesn’t really match the puree.

Another friend of mine chose the steelhead option. I didn’t try the fish so I’m not going to comment on that.

My other friend decided to not go for the special menu and simply ordered the roast loin of venison. Well, this was disappointing. The texture of the venison was quite dry and tough to chew. With regards to the taste, I think the chef was trying to overpower the gamey-flavour of venison so it was again, quite salty and conflicted with the gamey taste of the meat. I think my friend didn’t even finish one piece of it and just gave up on the dish. The servers were very attentive and asked if she would like to change for something else, but we politely declined.

For dessert, I chose the option where you get an assorted mini-desserts. That’s a chocolate, marshmallow, macaron, cranberry (?) jellied candy, and a piece of toffee candy (?) hiding behind the macaron. I chose this one because I didn’t want any desserts and just wanted to share them with my friends.

I tried a bite of the passionfruit mousse cake, and it was quite delicious. A tad too sweet, but if you’re into desserts and have a sweet tooth, I think you’ll like this one. It has toasted coconut flakes to it, which I thought was quite creative to match with passionfruit.

Another friend ordered a chocolate cake of some sort, I forgot whether it was a torte or a blackforest cake…regardless, I think in the dinner round this one really topped it all. It was so chocolatey and creamy that if you had the entire cake in front of me I would just keep on digging into it. It wasn’t the typical sweet chocolate cake type, but rather very rich in chocolate – and not just regular milk chocolate, I can definitely taste some dark chocolate in there (my favourite).

I think because our friend didn’t like her venison, the servers told us that they have a special dessert for us. We were quite surprised but to be honest, the heaviness of the entrees and the desserts really filled us up. It was nice for them to offer but we couldn’t finish it really. My friend really liked the marshmallows though, and I tried the little cupcakes but I’m not quite sure as what flavour it is exactly.

Overall, at the special menu price it is definitely a must-go, even just for the ambiance of the restaurant. If I had to pay full price for a 4 course meal though….then probably not again. I think this is a restaurant that you should go at least once to say “hey, I’ve been here before”. Food wise, you can tell the chef pays a lot of attention to the details of the food, but I find all the dishes to be a bit too heavy for my personal preference.